The New York State Trial Penalty: The Constitutional Right to Trial Under Attack

The ‘trial penalty’ refers to the substantial difference between the sentence offered in a plea offer prior to trial versus the sentence a defendant receives after trial. This penalty is now so severe and pervasive that it has virtually eliminated the constitutional right to a trial. To avoid the penalty, accused persons must surrender many other fundamental rights which are essential to a fair justice system. [NYSACDL & NACDL] [Released March 2021] 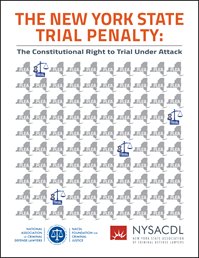 On March 26, 2021, NYSACDL and NACDL released this critically important report on the trial penalty in the New York State criminal legal system. This is the first-ever report on the decades-long impact of the trial penalty in New York State. It includes statistical analysis of the prevalence of the trial penalty, personal stories demonstrating how the issue impacts all New Yorkers by effectively removing a critical check on the state’s justice system, and principles and recommendations for how policymakers and prosecutors can reverse this trend and protect New Yorkers’ constitutional rights.

Over the past three decades, the proportion of criminal cases that progress to trial in New York state has steadily declined. As of 2019, 96% of felony convictions and 99% of misdemeanor convictions in New York State were the result of guilty pleas — a troubling phenomenon that severely weakens the integrity of the justice system by circumventing juries. One of the most significant contributing factors behind this trend is the trial penalty, or the empirically greater sentence a criminal defendant receives after trial compared to what prosecutors offer in a pretrial guilty plea. The coercive impact of the trial penalty induces individuals to surrender a panoply of valuable rights under pain of far greater punishment, and it has been shown to induce innocent accused persons to plead guilty.

To better understand the scope of the trial penalty and its impact in New York, NYSACDL and NACDL conducted a survey of criminal justice practitioners across the state. More than three hundred criminal defense attorneys responded and shared how they and their clients experienced the trial penalty firsthand. NYSACDL and NACDL also conducted a statistical analysis of criminal case dispositions, including a sample of 79 cases from Manhattan criminal defense organizations with plea and conviction data to investigate the prevalence and impact of the trial penalty in the borough.